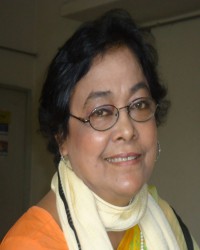 Title : Ensuring Holistic Education for Deprived Dropout Children and Women in an Innovative Way through Government and NGO

Brief: Dr. Angela Gomes is an eminent social worker and Founder Executive Director of Banchte Shekha (Learn How To Live), a leading NGO working since 1976 with the long-term objective of improving the socio-economic condition of women and children in Bangladesh. It directly serves more than 10,00,000 women all over the country and indirectly benefits more than 50,00,000 people through its programs.